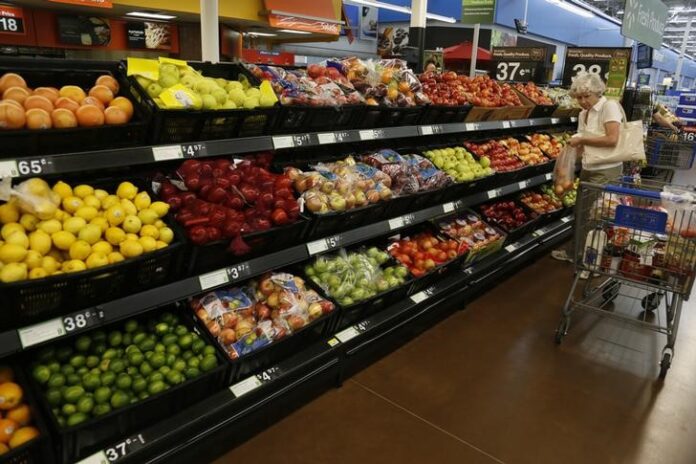 By Aishwarya Venugopal and Richa Naidu

(Reuters) -Walmart Inc on Tuesday raised its annual sales and profit forecast in anticipation of a surge in demand for toys and apparel during the crucial holiday season, even as global supply chain disruptions hit its margins in the third quarter.

Major retailers including Amazon.com (NASDAQ:) have been struggling to bring products into the United States ahead of the peak shopping season due to shipping logjams, shuttered factories in parts of Asia and a scarcity of raw materials in recent months.

However, Walmart (NYSE:) kept prices low to draw shoppers to its stores, and limited disruption from supply chain shortages by chartering its own vessels to ship goods, ordering products into the United States well ahead of time and re-routing deliveries to less crowded ports.

This helped Walmart increase U.S. inventory by 11.5% ahead of the busy festive season, with executives saying the measures taken to tackle port delays have positioned Walmart well for the holidays.

“We have the people, the products, and the prices to deliver a great holiday season for our customers and members,” Chief Executive Officer Doug McMillon said. Walmart said that it had hired over 200,000 new store and supply chain workers to tackle the holiday rush.

With more than 5,000 U.S. stores, the discounter’s size and leverage with consumer product companies allow it to sell goods at lower prices, a key advantage when U.S. inflation is at a 30-year high.

“The long period of sustained demand for goods has stretched supply chains, resulting in out of stocks and inflation,” McMillon said.

“Fighting inflation is in our DNA.”

The Bentonville, Arkansas-based company also said it expects full-year U.S. same-store sales to be more than 6% higher versus its prior forecast of a 5% to 6% rise. Adjusted profit is expected to be around $6.40 per share up from a previous range of $6.20 to $6.35.

In the third quarter, sales at U.S. stores open at least a year rose 9.2%, excluding fuel, benefiting from higher grocery demand and people buying more at stores. Analysts had estimated a gain of 7.04%, according to Refinitiv data.

“We gained market share in grocery in the U.S., and more customers and members are returning to our stores and clubs around the world,” McMillon said.

However, Walmart’s gross margins for the quarter declined 42 basis points, even as increased contributions from Walmart’s advertising business helped offset some of the supply-chain pressures. Walmart and other retailers are aggressively chasing consumer brands’ ad dollars, touting the wealth of their shopper data and prime media space on their websites and in stores.

Some analysts also warned of a margin hit during the festive season, with Evercore’s Greg Melich saying that supply chain issues or inflation could see Walmart down 10-30 basis points on its fourth quarter gross margin rate in the U.S.

Shares of the world’s largest retailer were down about 2%.

Total revenue grew by a better-than-expected 4.3% to $140.53 billion and on an adjusted basis it earned $1.45 per share, 5 cents above Wall Street expectations.

Why Are Safe Boxes With Electronic Keypads Awesome?

Janet - July 24, 2022 0
A safe box is an option to consider when wanting to store valuables, important documents, and money. You don't have to worry about them...

Janet - July 25, 2022 0
Organizations implement various strategies to build a first positive impression on the visitors, but one thing that most of them ignore is the comfortable...